Treatment will begin at Rondeau Provincial Park on Wednesday, September 12, 2018.

The Ministry of Natural Resources and Forestry (`the ministry`) has recognized invasive Phragmites australis as a significant threat to biodiversity and Species at Risk at Long Point and Rondeau coastal marshes. Using currently available management tools, the ministry has been working with several partners in an attempt to eradicate invasive Phragmites from these locations.

The ministry is undertaking the third year of an Emergency Use Registration of herbicide to treat Phragmites in aquatic environments.  Approval was obtained from the Pest Management Regulatory Agency, as well as permits and authorizations from Ministry of Environment, Conservation and Parks and Fisheries and Oceans Canada for the treatment of Phragmites in 2016 and 2017 and 2018 in the Long Point Region and Rondeau Provincial Park. Treatment in Rondeau Provincial Park uses a combination of aerial (2016) and ground (2016 and 2017) application equipment. In 2017, ground application methods were used to address approximately 17ha of Phragmites, which primarily consisted of small scattered populations.

The implementation of this pilot project at Rondeau and Long Point is based on the presence of significant natural values and the observed exponential growth of Phragmites in these coastal marshes. Local biologists and scientists have advised that the health of these coastal marshes is at a critical tipping point. If action is not taken to control Phragmites, the provincial, national and global significant values for which these areas are recognized will be lost. The attachments below provides a summary of the 2018 plans for implementation, communications and monitoring. 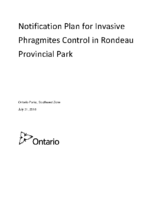 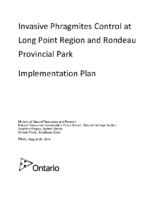 Preliminary monitoring results are summarized in the presentation links below.